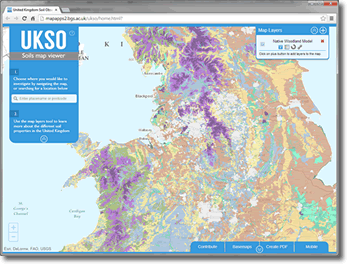 Cranfield is pleased to announce that the UK Soil Observatory (UKSO) has been shortlisted by the Association for Geographic Information (AGI) in their upcoming 2014 Awards for Geospatial Excellence. The UKSO was nominated for the AGI Award for Excellence with Impact. AGI describe this award as recognising projects which have achieved outstanding success or impact, measured against societal, humanitarian, environmental or financial benchmarks.

Cranfield University’s National Soil Resources Institute (NSRI) was pleased to play a part in the development of the UKSO, contributing several of its soil related datasets to the project. The UKSO draws together soils data from institutions such as the British Geological Survey (BGS), the James Hutton Institute (JHI) and the Agri-Food and Biosciences Institute (AFBI) and provides a unified starting point for accessing consolidated soil datasets via a series of interactive web maps and other web based resources. Further information on the UKSO is available on the project website.

The AGI awards have been launched to mark the AGI’s 25th anniversary. They are due to take place on Tuesday 11th November 2014. Further details on the awards are available here. 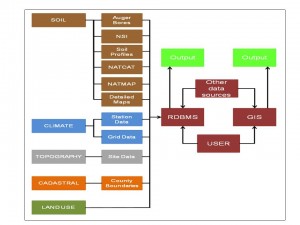 Cranfield University is fortunate in having the responsibility for operating one of the largest land information systems of its kind in europe. The Land Information System ‘LandIS’ is recognised by the UK Government as the definitive source of national soils information. Its origins reach back as far as the 1930s, when the first systematic collection of soil information in both England and Wales was commenced with the data being gathered requiring storage and codifying.

LandIS enables national soil information to be used by a broad range of users to guide better management, protection and use of our environmental resources. The information LandIS contains forms a valuable base from which to develop interpretive GIS models in support of all land use sectors. Applications include land management, crop suitability, pollution transport, pesticide leaching, nitrate sensitivity, land use policy, soil quality and protection, erosion, contamination, land degradation, waste disposal and climate change impact. LandIS information is used by Crown users and their contractors, researchers and consultants. Access to the data is strongly encouraged from students and academics, and a number of arrangements are in place to provide free or preferential access to the data.

Significant developments in recent years have enabled the effective use of appropriate soil data by non-specialists in a variety of forms. These include the popular Soilscapes Viewer, which has become an established, well-tested resource, used by both the general public, as well as many levels of government as a means of accessing simplified soils data for given areas. The Soil Site Reporter offers, in parallel, more detailed information reports on the soils surrounding a particular site including interpretations for vulnerability to subsidence, flooding, pesticide leaching and runoff, texture, hydrological properties and chemical elements in topsoil. The Soils Guide provides interactive details of the soil types of England and Wales. Access also remains to the core thematic datasets for direct integration with other user’s modelling tools and data holdings.