Once again, we’re preparing to wrap up for the year here at Cranfield University. Before we sign off, we’ll leave you with something that’s become a bit of a tradition with the Geothread team over the past couple of years; our Christmas Twitter map. Last year we mapped the spread of festive cheer across the country, according to Twitter users. Once again, we’ve collected a sample of 60,000 georeferenced tweets mentioning the word Christmas, along with a handful of other related keywords. These have been grouped by county and then normalised against a random sample of tweets taken earlier in the year to eliminate the effects of population density.

Comparing against the same map last year, it’s clear that there are several areas that are consistent in their anticipation of the festive season; Central Wales and North Yorkshire in particular. Anglesey and Conwy in North Wales certainly seem to be getting excited about things this year, whilst Cumbria and the Scottish Highlands don’t seem to be feeling the same level of enthusiasm that they did 12 months ago. 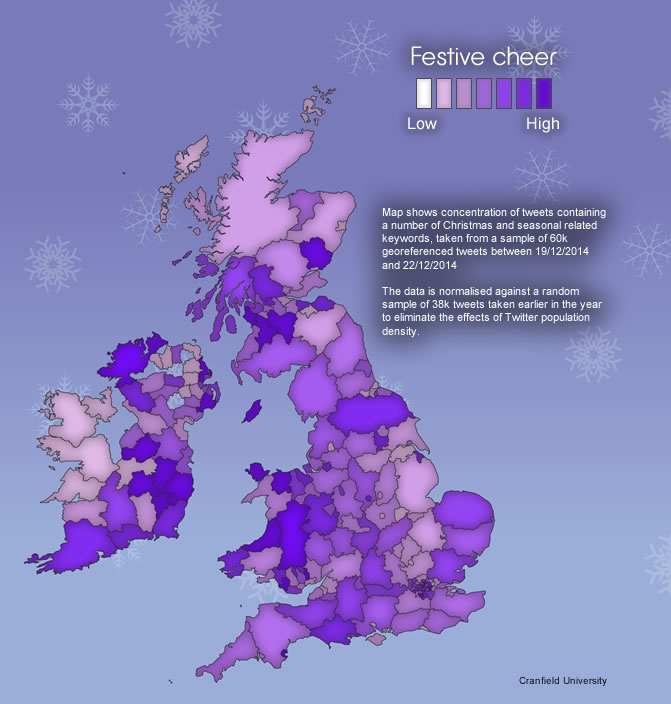 Apologies to anyone we missed out in Ireland. Unfortunately the random sample of tweets we used for normalisation did not include coverage of all of the British Isles, which is why there are some holes in the final map.

As a bonus this year, we’ve included an interactive map of the raw data collected from twitter, for you to explore below.

Merry Christmas and a happy New Year from all at Geothread!